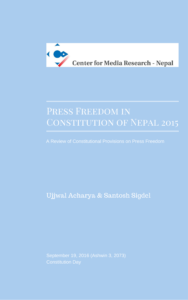 The author Acharya is a journalist and media researcher; and also the founder-chairman of the CMR-Nepal. Sigdel is an advocate specializing in human rights and having special interest in the civil liberties. Both are well known for their works on press freedom.